Occasionally I’ll see a piece of jewelry and become completely head-over-heels obsessed with it. All too often, it’s a piece of jewelry I have access to on a daily basis, and then it becomes a non-stop struggle not to spend everything I earn at our own store. This 2.4 ct (tw) diamond and white gold teardrop pendant is one such item. This is a Custom designed piece and holds approximately 30 diamonds of varying sizes, cascading from smallest to largest from top to bottom. Set in 14k white gold, it has a subtle but intense shimmer. This is a piece I see and get fuzzy headed over. It’s a piece I try on daily. It’s a piece that looks wonderful in its own beautiful simplicity, and it’s currently for sale in the shop. So stop by and check it out, and give me a chance to pull it out and swoon.

Here at Custom Jewelry, we find inspiration in the odd, strange, and slightly off-color, so it’s no wonder we love October around here. While some may find it macabre, we’re drawn to the slightly somber rituals at the end of this month: All Hallow’s Eve, Dios de los Muertos, and — while technically in November — All Saints and All Souls days.To us, there’s something beautiful about taking time out of our lives to remember those who have come before and who will continue to go after us, and in honor of this somber month, we’ve decided to post a few things throughout it to honor the gothic, the strange, and hopefully, the beautiful. Today, we start with the gothic: Berlin Iron Jewelry.

Dark, brutal, and strangely wonderful, Berlin Iron Jewelry is a style of jewelry that started in Berlin around the turn of the 19th century during the Napoleonic wars. During this time period, the aristocratic class was encouraged to give up their gold, silver, and other precious materials in order to help fund the war against Napoleon. In exchange, the classes were given beautifully black-lacquered iron jewelry with which to adorn themselves. What started as a sign of patriotism, soon spread into a fashion trend and led to more mass production of the iron pieces.

Created by a process called sand-casting, Berlin Iron Jewelry is formed via melting wax into sand and then pouring molten iron into the sand frames. Once cooled, the iron is taken out, finished with a black lacquer and either linked into bracelets, necklaces, or the popular chokers of the time period. You can spot Berlin Iron Jewelry by the stark, black material it’s made of, the very distinct lattice-work detailing, and its tendency to have Neo-classical imagery such as cameos and classical figures. Both beautiful and menacing, these intriguing pieces give us a glimpse into the past, remind us of the war torn country for which it was made, and show us that even the most ordinary objects can be extraordinary in the hands of the right craftsmen.

It’s not uncommon to pair diamonds with sapphires, but every once in a while they are combined in a new, statement-making way that makes you sit up a little straighter and take notice. This was the case with this fabulous diamond, sapphire, and white gold statement pendant we created for one of our clients.

Our very forward-thinking client came to us with a very clear vision. He wanted to make a pendant for his lady love. He wanted to use sapphires, diamonds, and white gold. And, he wanted the pendant to subtly reflect an M and a W, the initials of his love and himself. He even brought in illustrations of what he wanted, depicting the bold white gold lines you see in the finished product below and the stonework that bridged the metal together.

Leaving his vision in the hands of our jeweler extraordinaire, Lee took the illustration, rendered it, and worked his magic at the bench to make it a reality. The finished product is bold, clean, and significant. It depicts the love of two people by smartly joining their initials, and it is sure to make a big impact on anyone who has the pleasure of catching a glimpse of it on it’s wearer.

This is a piece we commissioned with our friend Phil at That’s Brilliant Lapidary.
Phil is a truly talented gem cutter, and we were happy to build this Custom silver setting to perfectly set off his hand cut blue topazes. Each setting was hand-fabricated to fit its stone and a simple silver chain was added to complete the piece.
We love to design pieces with our customers that are centered around their favorite gemstones. We are happy to help you find the gems and cuts you like. However, many customers have gemstones at home, either loose, or in an old setting, we love to make special designs from those as well! 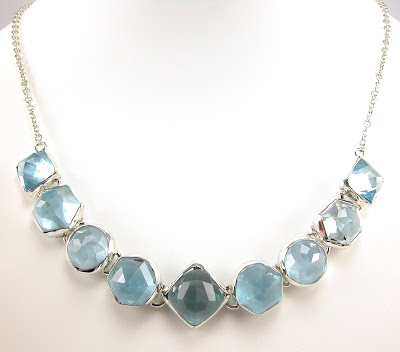 This piece is comprised of a fold formed sterling silver sheet, framed and then accented with a spessartine garnet. The fold formed area is antiqued to bring out the color in the beautiful garnet. The chain is a 3mm cable link with a heavy infinity clasp. This is just one more example of the handcrafted jewelry we make here daily at Custom. 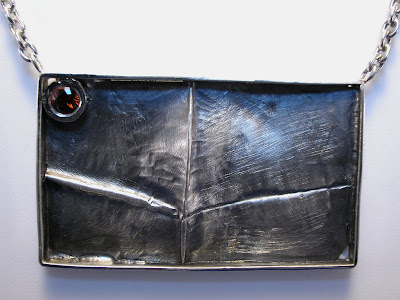 This is a commissioned piece created using a strand of amber the customer already owned. Double strands of amber are accented by sterling silver fold formed disks. The disks were fabricated for this piece, using the fold forming process, here at Custom. Fold forming is equivalent to Origami, with metal. The technique was developed by Charles Lewton Brain, around 1985. It is the only truly new form of metalsmithing created in centuries. So take a look at your old, unused, and dormant jewelry and imagine what new possibilities await you at Custom. 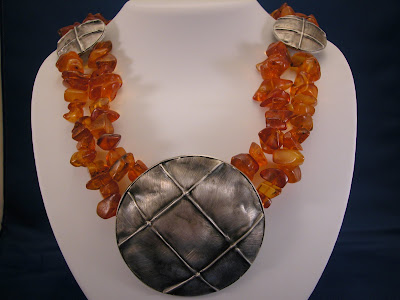 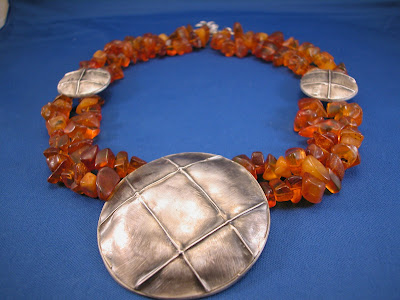